Investigating Exploration and the ‘Aha’ Moment

Archimedes was once asked by the king of Syracuse to determine whether a crown was made of pure gold. Archimedes pondered this task as he went to take a bath and noted that the water displaced when he entered his bathtub was equal to the volume of his body immersed in the water.

“Eureka!” he exclaimed as he ran through the streets naked. Archimedes’ ‘Aha!’ moment allowed him to understand how to measure the volume of an irregularly shaped object.

What happens in your brain when you experience an ‘aha!’ moment? Anecdotally you may feel your world expand and your understanding blossom…but what does that mean and how can someone create that experience?

These questions sparked an innovative collaboration between two scientists, Linda Palmer and Christine Gall, from the UCI School of Medicine and an artist, Jesse Jackson, from the Claire Trevor School of the Arts. This interdisciplinary team was awarded a ​UCI Brain Pilot Grant​ to support their ​innovative research proposal.

Palmer attributed her idea for this project to her background in philosophy. “I’ve been interested in the connection between art and science for a long time,” said Palmer. “The search for brain networks underlying the ‘aha’ moment comes from my work on the cognitive and aesthetic theories of the philosopher Immanuel Kant.”

Kant, an 18​th Century German philosopher, described what we call the ‘aha’ moment as a sense of pleasure in the mind’s own activity. 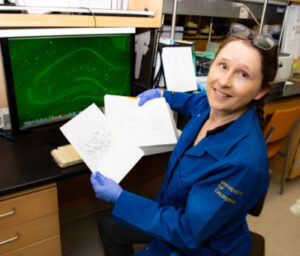 Dr. Linda Palmer in her lab at UC Irvine.

In Palmer’s view, both art and science involve processes of open-ended exploration and discovery, a precursor to the ‘aha’ moment. After hearing about The Artistic Brain theme at the UCI Brain Initiative Launch Event in November 2019, Palmer reached out to the Claire Trevor School of the Arts to find a potential collaborator to explore her theory. Dean Stephen Barker suggested she connect with Jesse Jackson, a visual artist whose work explores themes of navigation and experience of different environments, perception at different levels of abstraction, and active engagement of the audience.

Their initial phone conversation spanned two hours as Jackson drove through the snow from his home country of Canada back to Irvine. “These conversations were just fantastic,” explains Palmer. “There were a lot of natural fits between Jesse’s work and mine — it was really interesting to me that Jesse’s art, like my work in brain science and philosophy, itself explores themes of exploration and discovery. It’s interesting that both Jesse and myself come from interdisciplinary backgrounds: he from engineering to architecture to art, and myself from computer science (undergraduate) to philosophy (graduate) to neuroscience.”

Jackson explained, “I pulled over to the side of the road and we had an amazing conversation. Instead of using artwork to explain science, we wanted to create a project that begins to help us understand what is happening when someone experiences the pleasures and provocations of art.”

For this project, the collaborators agreed to explore two models. The first are some preliminary experiments towards monitoring the human response to experiencing artwork. The second explores a rat model, to understand the evolutionary basis and neural pathways of the ‘aha’ moment.

The challenge — and innovation — in both these models is how to create that elusive ‘aha,’ and even to know when it occurs. 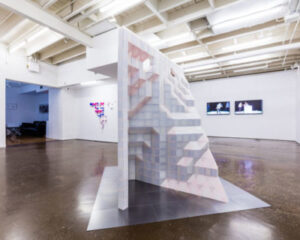 As an artist, Jackson will put forward two kinds of creative projects that, in his previous observations, might elicit ‘aha’ moments in the human brain. The first features photos and videos that apply varying levels of abstraction to well-known Orange County locations, such as the oceanfront and the Santa Ana River. Tracking technology will record the viewer’s reaction to these images, in the hope of capturing the ‘aha’ moment as the location becomes recognizable.

For the second, Jackson wants to observe how participants can manipulate, learn, and explore their way to the ‘aha.’ For this, Jackson will use an existing interactive project titled Marching Cubes, made up of 3D printed components that fit together in specific ways. As participants begin to explore these components, they will discover (aha!) the assembly rules. By actively participating in the art experience, does the viewer have a different kind of ‘aha’ moment?

Palmer reached out to Christine Gall, a leader in the field of neuroscience, to partner on the animal model portion of the project. Palmer and Gall have an equally challenging problem – how do you create an ‘aha’ moment for a rodent? Many studies use reward (e.g. cheese) as motivation to activate the areas in the brain associated with pleasure. However, the ‘aha’ moment in and of itself is the reward. The brain takes pleasure in these moments. The scientists will use a free exploration and learning protocol to create the ’aha’ experience. They will monitor brain activity in the rodent to find out what parts of the brain are activated during exploration and discovery.

“It’s really wonderful that the UCI Brain Initiative has included The Artistic Brain and supports such interdisciplinary work,” says Palmer. “Art is difficult to study scientifically, precisely because of its open-ended nature. And yet art and aesthetic experience are so essential to us as human beings. I hope that our work can contribute to better understanding ourselves and the connection between art and science.”